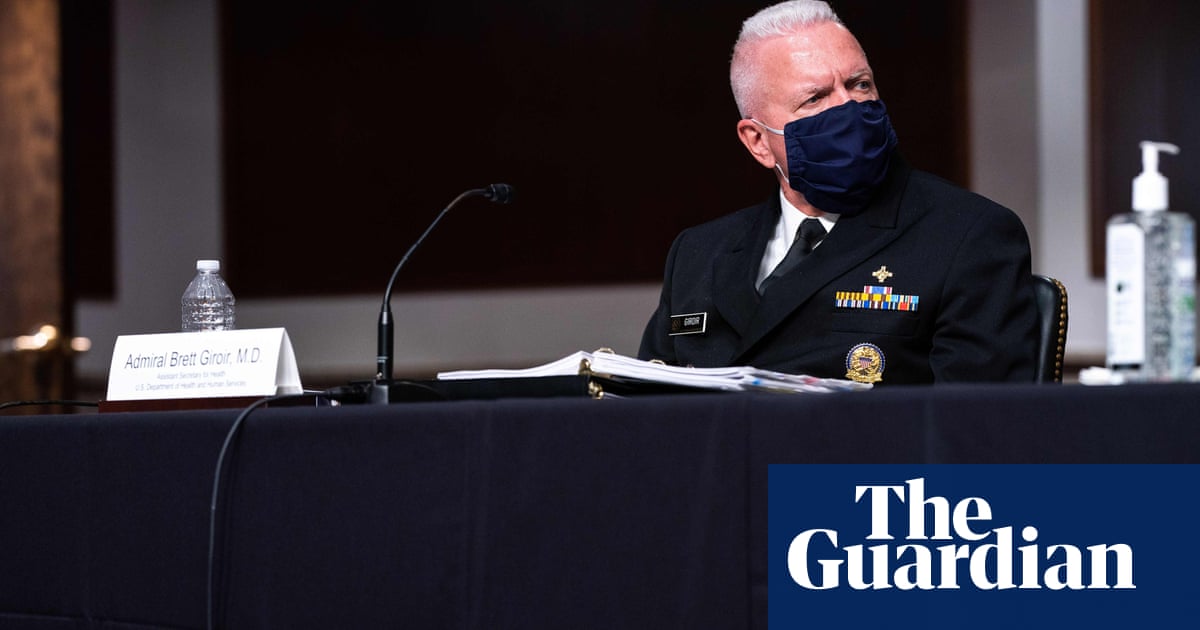 As the US closed in on 200,000 deaths from Covid-19, Donald Trump’s health secretary and a key member of the White House coronavirus taskforce defended the administration’s handling of the pandemic and insisted the president and a senior public health aide were both correct when they made contradictory statements about the imminency of an effective vaccine.

According to Johns Hopkins University, by Sunday morning 199,155 people had died of Covid-19 in the US, suggesting that at current death rates 200,000 would be reached later in the day or on Monday. Other counts put the death toll higher. Early in the pandemic, Trump said keeping deaths to 100,000 would represent “a very good job”.

The president’s handling of the outbreak has been widely panned, not least after revelations by the reporter Bob Woodward that Trump admitted knowing the seriousness of the threat early on but said he had played it down.

This week Trump also came under fire from a former member of his taskforce, Olivia Troye, who said: “If the president had taken this virus seriously … he would have slowed the virus spread. He would have saved lives.”

On Capitol Hill on Wednesday, CDC director Robert Redfield told the Senate a vaccine would not be generally available until the middle of 2021, adding that if one were available before the end of this year, it would be limited to emergency personnel and vulnerable people.

Trump said: “I think he made a mistake with that statement. When he said it, I believe he was confused. I’m just telling you we’re ready to go.”

Appearing on CNN’s State of the Union on Sunday, assistant health secretary Adm Brett Giroir said Dr Redfield was “correct” but offered a less ringing endorsement for Trump, saying: “The president is correct in the segment that he spoke about.”

Trump’s eagerness to promote a vaccine pairs with his refusal to enforce public health measures at campaign rallies as election day approaches. The president remains behind Joe Biden in national polls and in most key states. On Sunday an ABC/Ipsos poll found 69% of respondents did not trust Trump’s claims about a vaccine.

Giroir was asked why Trump was “making promises about a vaccine that none of his experts agree with”.

“I think there’s a lot of misunderstanding here,” he said. “And I think everybody is right but they’re talking about different aspects.

“In front of the Senate, Dr Redfield and I both said that a vaccine that would be widely available in hundreds of millions of doses would not likely happen until May 2021. That is a fact.

“President Trump said that [by] some projections, according to manufacturing if things go as planned, we could have as many as 100 million doses by the end of this year. That is correct.”

Giroir added that if “early in November or December, if we have 5% or 10% of the population that we can vaccinate, we can get 80% or 90% of the benefit.

“For example, if we could vaccinate workers in nursing homes, we could protect the elderly and the vulnerable from disease. That would make an enormous impact on mortality. If we could vaccinate our teachers, and those with pre-existing conditions, or those surrounding those people.”

Redfield also told the Senate face masks were “more guaranteed to protect me against Covid than when I take a Covid vaccine”, which would not always ensure immunity.

Trump said Redfield “made a mistake” and added: “Masks have problems too … a lot of people did not like the concept of mask initially, Dr Fauci didn’t like it initially.”

In fact Anthony Fauci, the head of the National Institute for Allergy and Infectious Diseases, has said he advised against masks early in the pandemic in an attempt to stop stocks being depleted.

On NBC’s Meet the Press, health secretary Alex Azar said: “I think the point the president was making is there’s not an equivalence between masks and vaccines.”

Asked about reports that a US Postal Service plan to mail masks to all Americans early in the pandemic was scrapped for political reasons, he said it had not been pursued because the administration chose to distribute masks in other ways.

Giroir was asked about the Trump campaign’s refusal to implement public health regulations at its rallies – other than insisting on masks for people seen behind the president on camera. Troye, formerly Vice-President Mike Pence’s national security adviser, said Trump made derogatory comments about such rally-goers, who he called “disgusting people”.

“Biology is independent of politics,” Giroir insisted. “If you cannot physically distance, all the doctors, all the public health experts, all of us are really unanimous that it’s important to wear a mask.

“When you cannot physically distance, avoid the indoor crowded spaces, wash your hands, combined with smart testing … that’s the way we reduce mortality, but we have to keep doing that. This will not be over until we get a vaccine that’s widely available.”

Host Jake Tapper concluded with a remarkable appeal to Giroir, made in the knowledge that he would not comment but hoping his boss might be watching.

“The most powerful person in this country is constantly undermining your message about mask wearing,” Tapper said of Trump. “You need to convince him to change that message because one of the reasons spread continues is because people are not respecting the words you are saying, words that I think are very important.

“Thank you so much for being with us today.”