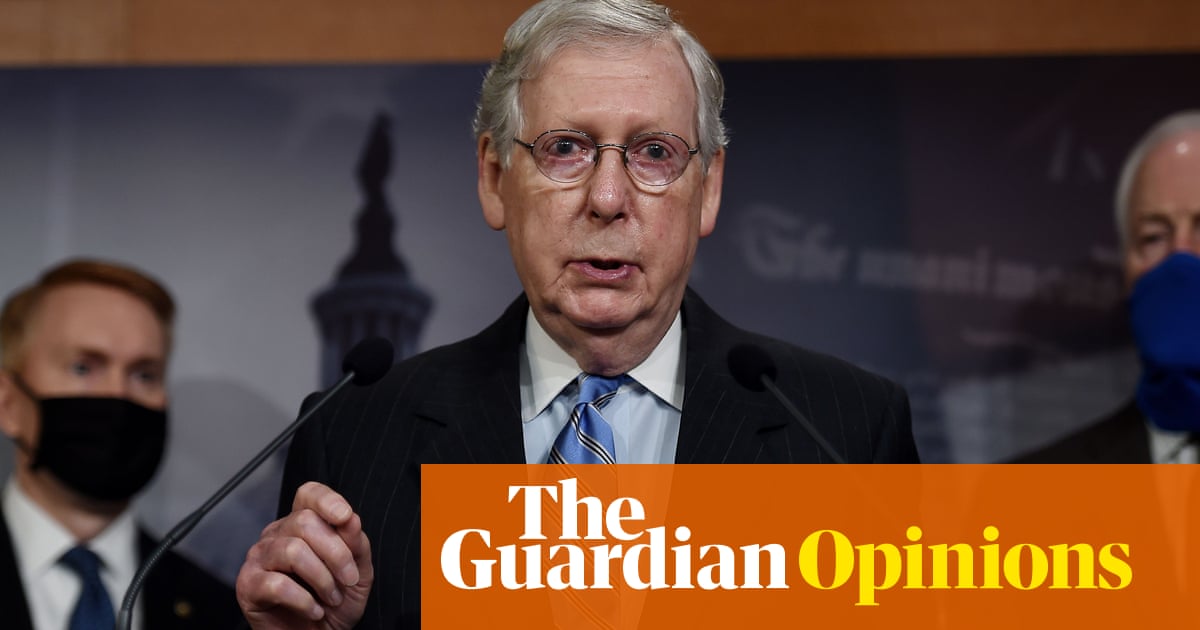 Justice Ruth Bader Ginsburg, who died on Friday night at the age of 87, exemplified the first.

When he nominated her in 1993, Bill Clinton called her “the Thurgood Marshall of gender-equality law”, comparing her advocacy and lower-court rulings in pursuit of equal rights for women to the work of the great jurist who advanced the cause of equal rights for Black people. Ginsburg persuaded the supreme court that the 14th amendment’s guarantee of equal protection applied not only to racial discrimination but to sex discrimination as well.

For Ginsburg, principle was everything – not only equal rights, but also the integrity of democracy. Always concerned about the consequences of her actions for the system as a whole, she advised young people “to fight for the things you care about but do it in a way that will lead others to join you”.

Mitch McConnell, the Senate majority leader, exemplifies the second category. He couldn’t care less about principle. He is motivated entirely by the pursuit of power.

McConnell refused to allow the Senate to vote on Barack Obama’s nominee to the supreme court, Merrick Garland, in February 2016 – almost a year before the end of Obama’s second term – on the dubious grounds that the “vacancy should not be filled until we have a new president”.

McConnell’s move was a pure power grab. No Senate leader had ever before asserted the right to block a vote on a president’s nominee to the supreme court.

McConnell’s “principle” of waiting for a new president disappeared on Friday evening, after Ginsburg’s death was announced.

Just weeks before one of the most consequential presidential elections in American history, when absentee voting has already begun in many states (and will start in McConnell’s own state of Kentucky in 25 days), McConnell announced: “President Trump’s nominee will receive a vote on the floor of the United States Senate.”

This is, after all, the same Mitch McConnell who, soon after Trump was elected, ended the age-old requirement that supreme court nominees receive 60 votes to end debate and allow for a confirmation vote, and then, days later, pushed through Trump’s first nominee, Neil Gorsuch.

Ginsburg and McConnell represent the opposite poles of public service today. The distinction doesn’t depend on whether someone is a jurist or legislator – I’ve known many lawmakers who cared more about principle than power, such as the late congressman John Lewis. It depends on values.

Ginsburg refused to play power politics. As she passed her 80th birthday, near the start of Obama’s second term, she dismissed calls for her to retire in order to give Obama plenty of time to name her replacement, saying she planned to stay “as long as I can do the job full steam”, adding: “There will be a president after this one, and I’m hopeful that that president will be a fine president.”

She hoped others would also live by principle, including McConnell and Trump. Just days before her death she said: “My most fervent wish is that I will not be replaced until a new president is installed.”

Her wish will not be honored.

If McConnell cannot muster the Senate votes needed to confirm Trump’s nominee before the election, he’ll probably try to fill the vacancy in the lame-duck session after the election. He’s that shameless.

Not even with Joe Biden president and control over both the House and Senate can Democrats do anything about this – except, perhaps, by playing power politics themselves: expanding the size of the court or restructuring it so justices on any given case are drawn from a pool of appellate judges.

The deeper question is which will prevail in public life: McConnell’s power politics or Ginsburg’s dedication to principle?

The problem for America, as for many other democracies at this point in history, is this is not an even match. Those who fight for power will bend or break rules to give themselves every advantage. Those who fight for principle are at an inherent disadvantage because bending or breaking rules undermines the very ideals they seek to uphold.

Over time, the unbridled pursuit of power wears down democratic institutions, erodes public trust and breeds the sort of cynicism that invites despotism.

The only bulwark is a public that holds power accountable – demanding stronger guardrails against its abuses, and voting power-mongers out of office.