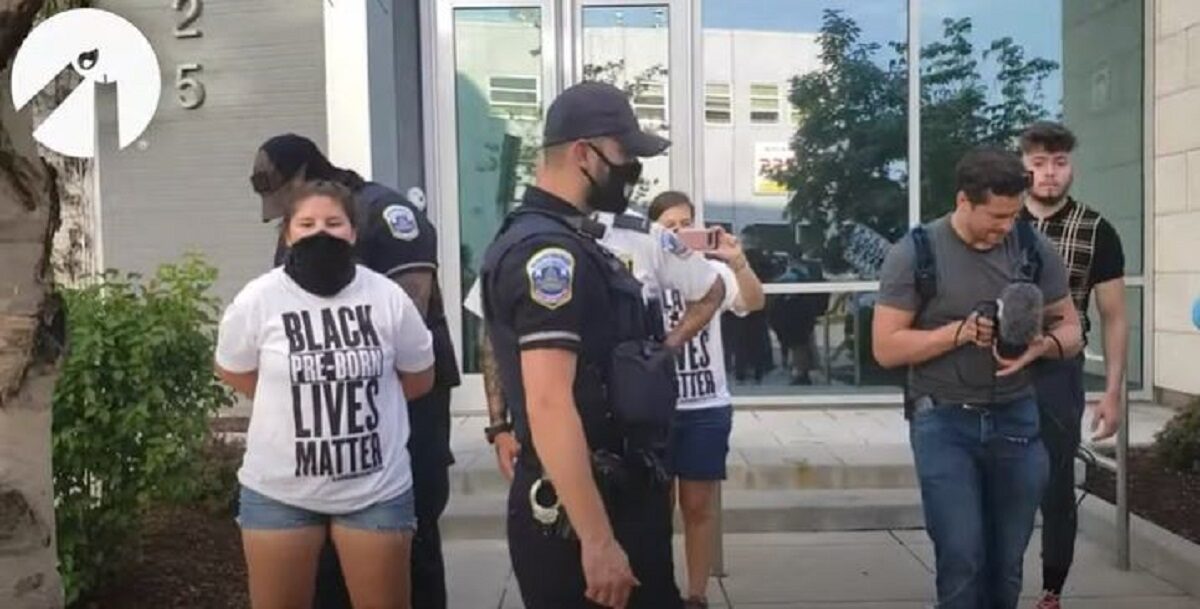 Washington, D.C., police on Saturday arrested a man and a woman for drawing “Black Preborn Lives Matter” in chalk outside a Planned Parenthood.

Video footage shows police officers approach the students at approximately 7:20 a.m. and warn them they will be arrested if they don’t stop.

“Hey folks, I need to tell you now, that if you continue chalking you’re going to be placed under arrest for defacing property,” one officer says.

When the man and woman do not stop, they are placed under arrest as bystanders watched.

“You know they do this every Saturday, right?” one said. Another shouted: “Government censorship!”

A Metropolitan Police Department spokeswoman confirmed in an email to The Epoch Times that the arrests were for defacing of private/public property. Neither person was taken to jail. They were instead released with citations to appear in court.

According to city code, it is illegal to “write, mark, draw, or paint, without the consent of the owner or proprietor thereof, or, in the case of public property, of the person having charge, custody, or control thereof.”

Planned Parenthood, a group that provides abortions and other services, didn’t respond to a request for comment.

Students for Life of America, a pro-life group, said it obtained a permit for the gathering and was using temporary paint that the police department specifically requested.

“When we asked if we could at least use sidewalk chalk to chalk our anti-violence message on the streets, the police threatened to arrest us,” Kristan Hawkins, president of the group, said in a statement to The Epoch Times.

“With these threats D.C. Mayor Muriel Bower has made her motives clear as she apparently only thinks that SOME Black Lives Matter and that only SOME slogans are allowed to be painted on streets,” she added. “Apparently, she thinks only some Black lives matter, and she will be hearing from Students for Life’s attorneys about these unconstitutional efforts to limit speech to government-approved topics.”

Bowser, a Democrat, in June renamed a portion of 16th Street NW to Black Lives Matter Plaza and allowed the painting of large, yellow letters spelling out “Black Lives Matter” and “Defund the Police.”

Students for Life of America and the Frederick Douglass Foundation sent a letter to Bowser on July 20, asking for permission to paint a separate mural, which they then attempted on Saturday.

The painted words would “celebrate the beautiful children with endless potential who are the future of their community and deserve the opportunity to make their mark in the world,” the groups said in the letter, citing findings that black women made up 36 percent of all abortions in 2015 in the United States.

Bowser’s office didn’t immediately respond to a request for comment.