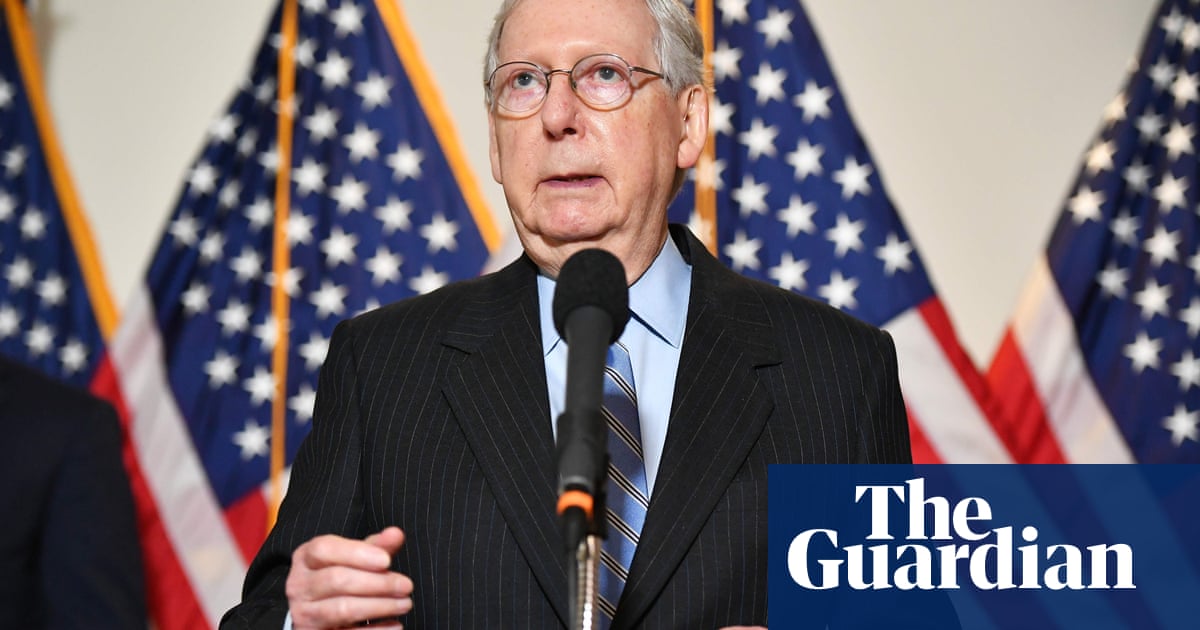 Shortly after the 87-year-old justice’s death was announced, the Republican released a statement removing any doubt about his intention to act, though the timeline for doing so remained notably vague.

“Americans reelected our majority in 2016 and expanded it in 2018 because we pledged to work with President Trump and support his agenda, particularly his outstanding appointments to the federal judiciary. Once again, we will keep our promise,” McConnell said in a statement. “President Trump’s nominee will receive a vote on the floor of the United States Senate.”

The death of one of the most prominent and celebrated supreme court justice’s in American history has suddenly transformed an already volatile election season into an all-out battle for control of every branch of government. Trump, facing a difficult re-election, has signalled a desire to quickly nominate a third justice.

The decision will likely be met with outrage from Democrats, who are still furious over McConnell’s refusal to consider Barack Obama’s nomination of judge Merrick Garland to replace the conservative justice Antonin Scalia, who died months before the 2016 election. Analysts believe the controversial decision – and Trump’s commitment to nominating “pro-life” justices to the court – was critical to his surprise presidential victory in 2016.

The confirmation of Trump’s supreme court appointees Neil Gorsuch and Brett Kavanaugh secured a solid conservative majority on the court. If Trump is successful in confirming a third nominee, the conservative bloc would dominate the nation’s highest court, likely for decades to come.

Earlier this month, Trump unveiled a list of 20 potential nominees to the court. Among a host of judicial conservatives were three Republican senators: Tom Cotton of Arkansas, Ted Cruz of Texas and Josh Hawley of Missouri.

While the courts have long motivated conservative voters, who see the judicial branch as a bulwark against a changing electoral landscape, liberals have become increasingly motivated by judicial appointments during the Trump era. The prospect of a conservative majority has alarmed liberal voters, who are fearful a conservative court would overturn Roe v Wade, the landmark supreme court decision that established a right to abortion.

The titanic clash over Trump’s choice to replace Ginsburg – and how the Senate proceeds with the nomination – may well determine the outcome of the election in November.

“In the coming days, we should focus on the loss of her justice and enduring legacy,” Democratic presidential nominee Joe Biden said on Friday night, speaking from an airport in Delaware after returning from a campaign trip to Minnesota. “But there is no doubt, let me be clear, that the voters should pick the president and the president should pick the justice for the Senate to consider. This was the position of Republican Senate took in 2016, when there were almost 10 months to go before the election [and] that’s the position the United States Senate must take today.”

Trump, who was speaking at a rally in Montana when the news of Ginsburg’s death broke, mused about appointing Cruz and touted his appointments to the court, though he appeared oblivious of the partisan battle brewing offstage.

The White House press secretary, Kayleigh McEnany, said Trump was unaware of her death when he took the stage on Friday, and said the White House would lower the flags in her honor.

It was unclear if McConnell intended to push for a vote before the November election or wait until the lame-duck session, the period following the election but before the new president is sworn-in. Control of the Senate hangs in the balance, and already some of his members have voiced concern about the prospect of ramming through a nominee weeks before an election, particularly given McConnell’s position four years ago.

Senator Susan Collins, one of the most vulnerable Republican incumbents, told the New York Times earlier this month that she would not seat a Supreme Court justice in October, arguing that it was “too close” to the election. Unless Trump was re-elected, she said, she would oppose confirming the president’s nominee in a lame-duck session.

Shortly before Ginsburg’s death was announced, Lisa Murkowski, a Republican from Alaska, told a state radio station that she would not vote to confirm a new justice before the election. Explaining her rationale, she said it was the same logic McConnell applied to Obama’s final supreme court nominee.

“That was too close to an election,” she said, characterizing McConnell’s argument.

Yet Kelly Loeffler, a Georgia Republican attempting to beat back a strong challenge from her right, urged the president to appoint a new justice.

“Our country’s future is at stake & @realDonaldTrump has every right to pick a new justice before the election,” she wrote on Twitter. “I look forward to supporting a strict constructionist who will protect the right to life & safeguard our conservative values.”

McConnell has argued that the current situation is different from that of 2016. Then, Republicans controlled the Senate, the chamber that confirms supreme court nominees, while a Democrat occupied the White House. This time, he contends, the same party controls both branches, and therefore the confirmation should proceed.

Democrats have balked at this argument, saying it threatens the legitimacy of the court. Even some of the president’s closest allies say a confirmation should not take place in the final months of an election cycle.

Senator Lindsey Graham, who is facing an unexpectedly competitive re-election contest in South Carolina, said during an interview in 2018: “If an opening comes in the last year of President Trump’s term, and the primary process has started, we’ll wait to the next election.”

“You’re on the record,” the interviewer said to Graham, in a video clip that was widely shared online Friday night.

“Hold the tape,” he replied.