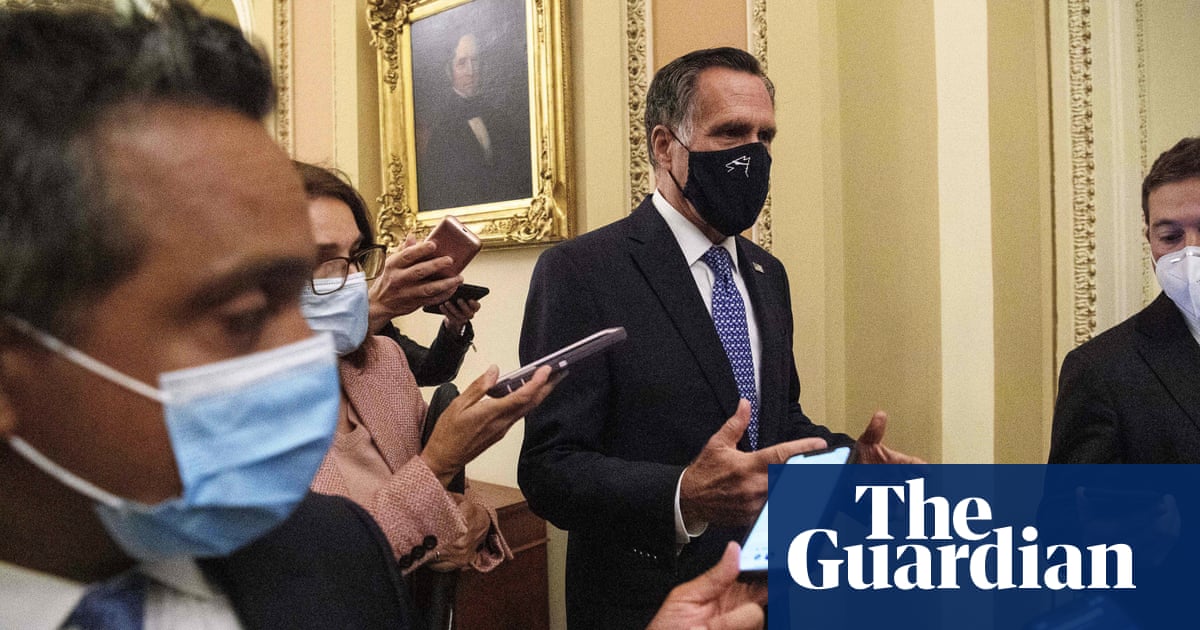 The move appeared to all but kill off Democrats’ hopes of blocking a successor to liberal justice Ruth Bader Ginsburg, who died last week aged 87. Two Republican senators have indicated their opposition to confirming a nominee before the November election but Democrats need two more.

Romney, a former presidential nominee who was the sole Republican who voted to remove Trump from office at his impeachment trial, was seen as a make-or-break swing vote. He said in a statement: “The constitution gives the president the power to nominate and the Senate the authority to provide advice and consent on supreme court nominees.

“Accordingly, I intend to follow the constitution and precedent in considering the president’s nominee. If the nominee reaches the Senate floor, I intend to vote based upon their qualifications.”

Romney’s announcement drew immediate criticism. Joe Lockhart, a former White House press secretary under Bill Clinton, tweeted: “Riddle me this Senator Romney. You voted to remove the president [from] office for crimes against the state, yet now you believe that same president should have the right to nominate a supreme court justice. A president you thought was unfit to continue to serve. Explain?”

The decision appeared to give Mitch McConnell, the Senate majority leader, the votes he needs to confirm Trump’s nominee, though he still faces a challenging timetable just six weeks before the election.

McConnell and allies such as Lindsey Graham have brushed off charges of hypocrisy after they stonewalled Merrick Garland, Barack Obama’s nomination in 2016, also an election year.

Democratic presidential candidate Joe Biden made an impassioned plea on Sunday to the “conscience” of Republican senators, to respect democratic norms. It appears to have been in vain. Only Susan Collins of Maine and Lisa Murkowski of Alaska have said the next president should decide the vacancy. Collins faces a tough challenge in the November election, when control of the Senate also is at stake.

But with Republicans controlling the Senate 53-47, Collins and Murkowski’s rebellion alone will not be enough to halt the process. Democrats have few if any options.

Dick Durbin, the No 2 Democrat, told reporters: “I’ve been around here a few years. You can slow things down but you can’t stop them.”

Trump has said he intends to nominate a woman – his third appointment to the court overall. He tweeted on Tuesday: “I will be announcing my supreme court nominee on Saturday, at the White House! Exact time TBA.”

The president has mentioned two women he appointed as federal appeals court judges as possible nominees: Amy Coney Barrett of the Chicago-based seventh US circuit and Barbara Lagoa of the Atlanta-based 11th circuit.

Trump met Barrett at the White House on Monday and has said he might meet Lagoa in Florida later this week. Strategists regard judicial appointments as a crucial tool for the president to shore up support with evangelicals and other conservatives worried about his vulgar insults and political competence.

The all-out political battle could also help him deflect attention from the coronavirus pandemic, which has now claimed 200,000 lives.

If Trump’s pick is confirmed, the court would have a 6-3 conservative majority with far-reaching implications for abortion, healthcare, gun rights, voting access, presidential powers and other spheres of American life.

Before she died, Ginsburg expressed a wish for her successor to be picked by the next president. A Reuters/Ipsos poll found that a majority of Americans, including many Republicans, want the election winner to make the nomination.

Democrats accuse Republicans of defying both the popular will and political norms, especially those they preached in 2016, undermining the integrity of the Senate.

Chuck Schumer, the minority leader, said on the Senate floor: “This is how our vaunted traditions of bipartisanship and compromise – on life support before now –end. This is how. By one side – in this case the Republican majority under Leader McConnell – deciding that the rules don’t apply to them, even their own rules. That, when push comes to shove, is brute political force, all the way down.”

Schumer added: “If my friends on the Republican side want that kind of Senate, they can follow Leader McConnell down the very dangerous path he has laid down.”

Rashad Robinson, president of the civil rights advocacy group Color of Change, said: “Those that stand by them as they break this rule have to also just wrestle with all of the ways in which the Republicans do not care about the rules. They talk about law and order. They talk about the rule of law. But time and time again, as long as it’s about building power for them, and as long as it’s about setting up different set rules for them, their word means nothing.”

He added: “This is what we’ve seen from the Trump administration from the beginning. So I don’t know how helpful it is for us call them hypocrites or or yell about how surprising it is or throw their quotes back in their faces, because for the last four years that’s what we’ve been doing.”

Ten former federal judges, including former FBI director William Webster, have pleaded with Senate leaders to withhold consideration of a nominee until after inauguration day. The legitimacy of the court “is not something that can be recovered if it is lost”, they wrote.

“It is up to you to demonstrate the same restraint demanded of our judiciary.”

Public mourning for Ginsburg will be held in front of the court on Wednesday and Thursday. On Friday she will become the first woman to lie in state at the US Capitol.