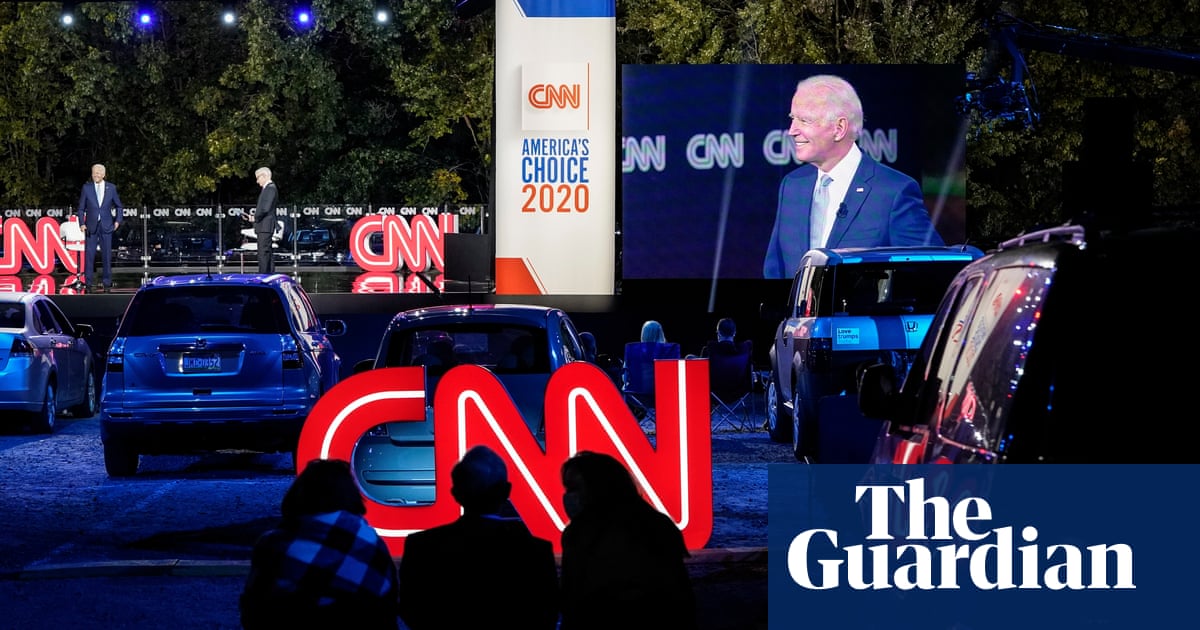 Joe Biden sent a message to voters on Thursday night that differed starkly from Donald Trump’s unlikely coronavirus promises, saying: “The idea that there’s going to be a vaccine, and everything is going to be fine tomorrow is just not rational, just not reasonable.”

Speaking at a drive-in town hall in the Pennsylvania town of Moosic, just south of Scranton, the Democratic nominee warned the country would not immediately return to normal life even if a coronavirus vaccine was soon approved.

Biden’s CNN town hall came two days after Donald Trump held a similar event in nearby Philadelphia, but the president sent a very different message on the pandemic, once again implausibly suggesting coronavirus was “going to disappear” and that a vaccine would be available in weeks.

Biden’s unusual town hall venue underscored the long road ahead the country faces. Biden addressed an audience of about 250 voters, some of whom sat in camping chairs next to their parked cars as the former vice-president took their questions. “Who knew drive-ins were coming back?” the CNN anchor Anderson Cooper joked at the start of the event.

Echoing comments he made during a Wednesday speech, Biden said he did not trust Trump’s statements on the development of a coronavirus vaccine, accusing the president of politicizing the issue for the sake of his re-election.

“I don’t trust the president on vaccines. I trust Dr Fauci,” Biden said, referring to the director of the National Institute of Allergy and Infectious Diseases. “If Fauci says the vaccine is safe, I’d take the vaccine. We should listen to the scientists, not to the president.”

Biden’s comments were a notable contrast to Trump’s clash this week with Dr Robert Redfield, the director of the Centers for Disease Control and Prevention. The president questioned Redfield’s credibility on Wednesday, after the CDC director testified to the Senate that a coronavirus vaccine would not be widely available until the late second quarter or early third quarter of next year. Trump claimed Redfield was “confused” when he made that prediction.

During his town hall, Biden said Trump’s response to the pandemic had been “close to criminal”, and he did not shy away from discussing the country’s mounting coronavirus death toll, which is expected to surpass 200,000 within days.

The first voter to ask Biden a question, Shani Adams, noted she recently lost her sister to coronavirus. Biden expressed his condolences to Adams and told her: “You know, we talk about almost 200,000 deaths and it’s almost like background noise. But it means a lot of empty chairs.”

In contrast Trump suggested on Wednesday that the country’s coronavirus death toll would be much lower if Americans who lived in Democratic-controlled states were not counted.

Virtually every answer Biden provided on Thursday appeared designed to draw a clear distinction between himself and the current president. Drawing on his early childhood in Pennsylvania, Biden described the presidential race as “a campaign between Scranton and Park Avenue”.

When Anderson asked Biden if he believed he had benefited from white privilege in his life, the Democratic nominee acknowledged he had but quickly pivoted to a reflection on classism.

“Grow up here in Scranton. We’re used to guys who look down their nose at us,” Biden said. “Guys like Trump, who inherited everything and squandered what they inherited, are the people that I’ve always had a problem with. Not the people who are busting their neck.”

While a number of Biden’s answers were short on policy details, the Democrat instead spent much of the night presenting a character-based argument for his candidacy. Criticizing Trump for raising doubts about the legitimacy of the election, Biden asked, “What’s happened to us? This is not who we are. This is not what America is. No president’s ever said anything like that.”

When asked if he would accept the results of the election, Biden said: “Sure, the full results, count every vote.”

The next major opportunity for Biden to change the minds of undecided voters will come later this month when he debates Trump for the first time. Biden told Cooper that he had already started preparing for the debates, studying Trump’s recent comments and crafting concise answers to potential questions. “I’m looking forward to it,” Biden said.