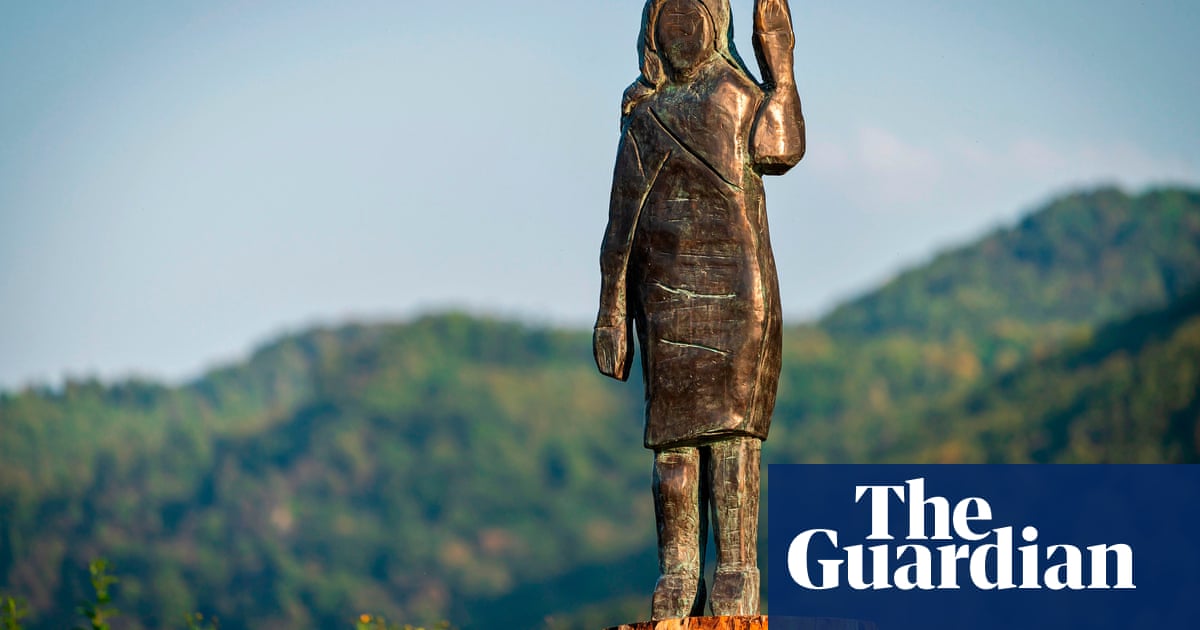 The American artist behind a controversial statue of the US First Lady Melania Trump, unveiled this week in bronze in her native Slovenia, has defended the work as a representation of the contradictions of her husband’s presidency.

Brad Downey, a conceptual artist from Kentucky based in Berlin, said the statue that replaced an earlier wooden carving destroyed in an arson attack in July, was motivated by his “frustrations with the policies of my birth country.”

“On the one hand we have people being held in cages on the US border with Mexico, on the other, in what is to me a clear contradiction, we have a first lady who is the first ever for whom English is not her mother tongue, whose US citizenship was fast-tracked on a visa reserved for immigrants with extraordinary ability. At the same time her husband is xenophobic, anti-Islamic.

“I felt I could isolate this contradiction and make a portrait of it.”

The statue, which stands on a poplar tree trunk near Trump’s hometown of Sevnica in south-eastern Slovenia, is part of a project Downey began several years ago. It has culminated in the documentary, Melania, which respectfully portrays the craftsman Aleš “Maxi” Župevc, a professional pipe layer with no academic art school background, who makes folk art chain saw sculptures in his spare time.

“I chose Maxi out of several local artists, because of the parallels between his life and Melania’s,” Downey said. “He was born in the same month and year and at the same hospital as her. Like her – her father was a mechanic and she grew up in a high-rise – he is from a working class family.

“I took the position that I was not going to control the aesthetics of the project. I would keep a conceptual distance, and not dictate anything. I only gave him a photo to work from, of the moment she became the first lady.”

Downey bought the tree and cut it to the right proportions as well as buying the plot of land on which the statue stands which gave him the right to erect it.

He paid Maxi for creating the work, carved out of a poplar tree. It depicts a waving Melania Trump clad in a blue woollen dress.

The carving stood in the field more or less unnoticed for a year, until Downey arranged an informal unveiling, after which it was picked up by the world’s media who largely ridiculed it, drawing comparisons with everything from a smurf to a scarecrow.

“I didn’t plan it as a meme,” Downey insists, “though I suppose I was not really surprised that it was so meme-friendly.” The locals with whom he was in contact, were appreciative of the monument. “They came to the unveiling and we ate cake – the local Melanja Tort with cream and nuts, and drank wine. My parents and wife flew over. People said they liked it,” he said.

But he received a flurry of hate mail, “from both the left and the right”, which, along with the media reactions, he said he will integrate into his ongoing “Melania” documentary series.

“On the one hand were people criticising me, asking: ‘why have you monumentalised this woman?’, on the other, were people saying “she’s far better looking than that”.

Following in the tradition of propaganda monument protocol, with a particular focus on Cold War era busts and statues which deified communist leaders, also in Slovenia, Downey had already made a silicon cast of the wooden statue last year, with a view to making a bronze version of it.

“After Lenin took control of Russia following the October Revolution, he ordered the installation of thousands of wooden Lenins, from Kyrgyzstan to Ukraine,” Downey explained. “Over time, they were slowly turned into more permanent bronzes. The trend later expanded into China.”

When the wooden Melania carving was burnt in an apparent arson attack on 4 July this year – some locals, Downey says, “suspect the CIA’s involvement”, though the police have yet to find the perpetrators – he quickly removed the charred and blistered remains, which later went on display in an art exhibition.

The bronze replica was created during the Covid-19 lockdown, which forced him to stay in Slovenia, and was unveiled by Maxi on Wednesday, in the presence of around 20 locals who brought home-made wine with them.

A spokesman for the municipality of Sevnica, Melania Trump’s birth town, made clear his disapproval of the statue, telling the Slovenian daily, Dnevnic: “it does not correspond to our values of cultivating feelings of respect to our fellow human beings”.

Downey’s performance in Slovenia has neatly coincided with the toppling of statues in conjunction with the recent Black Lives Matter protests, from which the United States has been reeling.

“Whilst I agree with the BLM ideas, though not necessarily pulling down monuments, I thought in this case, this is like a side effect – a memorial to a monument which is critical of monumentalism, the perception of power and those that support it.”