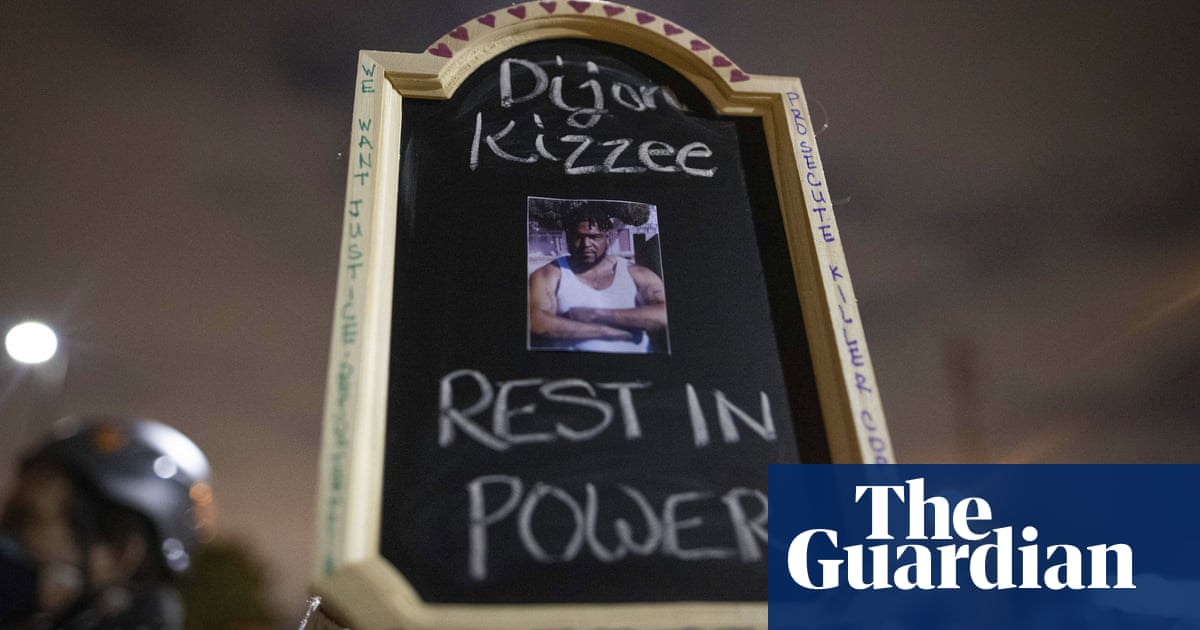 A Black man killed by Los Angeles sheriff’s deputies wasn’t holding a gun when officers fired 19 shots at him, attorneys for his family said Tuesday, contradicting police officials’ claim that he was armed during a struggle.

Dijon Kizzee, a 29-year-old bicyclist, “posed no threat“ to deputies when they fired a flurry of bullets, striking him at least 15 times, the civil rights attorney Benjamin Crump said at a news conference.

“It is with a heavy heart that I’m standing with yet another Black family who has lost a loved one because of the excessive brutal force of the people who are supposed to protect and serve them,” Crump said. The attorney also represents the families of George Floyd and Jacob Blake.

“All I want is justice for my nephew,” said Fletcher Fair, Kizzee’s aunt, as she called for the deputies to be arrested. “He didn’t have to be killed like that. He’s no animal. He’s human like we are.”

Kizzee was killed 31 August in South LA after sheriff’s deputies tried to stop him for riding a bicycle in the wrong direction. They alleged that he had a weapon wrapped in a piece of clothing he was carrying, but said they were unaware of that when they stopped him for the “vehicle code violation”.

Two deputies told investigators they fatally shot Kizzee after he picked up the handgun he had dropped during a struggle with one of them, authorities said last week. A video shows him stooping down. But a wall blocks a full view, and no weapon can be seen.

It doesn’t appear the deputies tried to de-escalate the situation before shooting Kizzee. Authorities previously said Kizzee had only “made a motion” toward the gun but recently revised their narrative, saying the deputies have now claimed he had picked it up.

Kizzee was shot multiple times in the chest and arms and once in the back, authorities have said. The full autopsy hasn’t been completed yet.

Carl Douglas, another civil rights attorney who is representing Kizzee’s family, said witnesses said the deputies fired three or four shots at Kizzee, followed by a pause and then a second volley while he was on the ground.

“We have no comment about the private autopsy results,” Kent Wegener, the sheriff’s homicide bureau captain, said in a statement.

Asked about the department’s shifting narrative about the incident, Wegener recently told the Guardian, “The facts as we know them may change as the investigation progresses.”

“Until we change that warrior mentality to more of a guardian mentality, there’s going to be more (families) who have lost loved ones,” he said. “There’s a scourge that patrols the county of Los Angeles.”

The attorneys also questioned why the deputies sought to stop Kizzee while he was bicycling, calling it another example of “biking while Black” and racial profiling.

LASD is the largest county police agency in the country and has a long history of brutality scandals, controversial killings, racial profiling and corruption cases. Activists and some local lawmakers have been particularly alarmed at the continued high rate of killings this summer during the pandemic and amid national protests against police brutality.

Sheriff’s deputies have fatally shot at least eight people since the end of May, including Andrés Guardado, an 18-year-old security guard who was fleeing and shot five times in the back, and Michael Thomas, a 61-year-old grandfather who was unarmed and killed inside his home. In one case, deputies killed a man who they said was “walking on the sidewalk”, who they ended up taking to the ground after they saw he had a firearm. In another case, LASD killed a 38-year-old who had reportedly been hit by a train and allegedly approached officers with a knife.

This week, LASD also faced a lawsuit from the family of Eric Briceno, a 39-year-old with a history of mental illness who died after a violent police encounter in March. After his parents called police due to an altercation with their son, deputies entered Briceno’s room as he slept and then beat and shocked him and compressed his neck, according to the family and an autopsy report.

“We called them to come and help us, to get some help,” his mother, Blanca Briceno, told the Los Angeles Times. “And instead, they came and killed him, brutally killed him.”

She said the deputies attacked Briceno without provocation, beating him, using a baton, pepper spray and a Taser, and kneeling on his back. Briceno cried out that he couldn’t breathe, the family’s wrongful death claim alleged.

His mother said she pleaded for deputies to stop and when she took out her phone to record the scene, a deputy took it away and she was pushed out of the room.

The autopsy report said Briceno was shocked with a Taser seven or eight times. It concluded he died of cardiopulmonary arrest resulting from neck compression and restraint with a Taser, the LA Times reported.

The family has called for the deputies to face criminal charges. LASD has declined to comment on the legal claim, citing an ongoing investigation.